A few years ago I was travelling from Salt Lake back to Boise for a work trip. While we were waiting to board, I noticed a woman babywearing. She was carrying her infant in an Ergo. I thought her carrier looked pretty cool, and beyond that didn’t really think anything of it. Once we boarded the plane, the woman ended up sitting across the aisle from me, in the aisle seat.

During take-off she breastfed her baby. No cover, no apologies, just fed her. I remember thinking “wow, that is brazen.” It didn’t really bother me, but I had never seen someone breastfeed their baby on a plane before. At the time of my trip my Sister-in-law was pregnant.  She ended up formula feeding, but I told her about the breastfeeding woman on the plane. She said she probably wouldn’t do that. Her husband told her he didn’t want her to feed in public at all.

I remember thinking, I would feed a baby in public, but probably not on an airplane. This is one of those “famous last words” type of things, declarations that I made before I was even pregnant about what I would or wouldn’t do as a mother.

As it stands now, I have been breastfeeding for 17 weeks and 2 days, and I am proud to have fed my baby in a variety of places. I was thinking yesterday about all of the different places I have fed him.

~The side of the road

~ a dinner party at my husband’s new coworkers house

~ and yes, even an airplane, no cover, just an artfully arranged swaddle blanket over my breast.

After I started breastfeeding, it just sort of became a non-issue for me. If my baby was hungry, I was going to feed him. It’s the life I chose when I decided to feed on demand. I’m so glad that breastfeeding is working for us!

Today I have been breast feeding my son for 8 whole weeks! I can’t believe it has been that long. Those first nights in the hospital seem so far away. 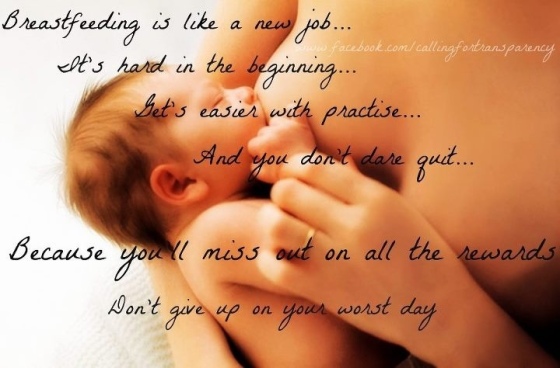 Photo via Facebook.
This is what I know about breast feeding:
1. It is hard, and it hurts until you and baby figure out how to latch.
2. A good lactation consultant is invaluable. Go see a certified consultant if one does not visit you before you are discharged from the hospital.
3. At times, in the first few weeks, formula seems easier.
4. It gets easier.
5. Having large breasts is a distinct disadvantage when trying to nurse in public.
6. Nursing in public; not a big deal once you do it.
7. Have a comfy place to feed, with a constantly full water bottle near by.
8. Knowing that you alone are giving and sustaining life is pretty incredible.

After a bath, with Grammy

I can’t believe that my baby is 3 weeks old today! I know that as the weeks progress, 3 weeks will seem so little, but right now, it feels like time is flying, and he is already so different than the day we brought him home.

Since bringing him home, he does two main things: eat and sleep. As the weeks progress he has more and more alert time, and I am starting to see a pattern emerge in his sleeping/waking/eating habits, not much of a pattern mind you, but more than the first couple of days.

After my c-section, I was terrified that I wouldn’t be able to breastfeed. No judgements on what other mothers do, for their babies, but it was really important to me that my son was breastfeed, and not formula fed. Again, if it had come, does come down to it, formula is fine, great even. I will do whatever I have to do to make sure my baby survives. BUT, breast feed, so far, has been going really well. As well as breast feeding goes for a new mom, and a 21 day old baby. The first 9 days were pretty rough. My nipples hurt, and I really had no idea what to expect.  Luckily, my midwife’s office, has an AWESOME lactation consultant on staff, and I made an appointment with her when Anderson was 9 days old. I had been feeling a tiny bit frustrated, mostly due to Anderson’s cluster feeding, and my lack of knowledge about if what I was doing was “right,” as in correct. She had me feed him in front of her, and she said that we were doing pretty well. She gave me a few pointers, that have made things better, and having the reassurance that we weren’t totally off base, was a great self confidence booster.  Now, at 21 days, I’m pretty confident in knowing if we have a good latch, and if he is eating, but feel like I’m on a new part of the breast feeding learning curve. I am feeding on demand,  and I feel like I can’t tell when he is eating because he is hungry, and when he is nursing for comfort. The internet  will tell you that babies don’t use mom as pacifiers, that if they are showing signs of wanting to nurse, that they are doing it either because they are hungry, or they know they need to increase your milk supply. Of course the internet will also give you the opposing position, and say that babies do use moms for pacification, and that you shouldn’t let your baby do that. You can find strong opinions on just about every aspect of child rearing, usually conflicting with eachother.

I have decided that if he is rooting around, and can’t be consoled by any means, than he is probably hungry and I feed him. Unfortunately, I think I sometimes don’t read his cues correctly. Last night he nursed for almost an hour (this was from 2:30 to 4:00 am by the way), I changed his diaper and he was fussy. I tried soothing him in my arms, but was so tired and frustrated (he had been fussy at the breast) that I didn’t really have the patience to try to soothe him with out offering him the chance to nurse. I did that, and he was not interested. I went into the bedroom, and told my husband to watch him, that I had to pee.  When I got back, my husband told me, to get in bed and go to sleep that he would soothe the baby and take him in the living room. And what do you know, he was able to soothe him to sleep, and he slept for almost two hours, till he woke up and was ready to nurse again. My point, I guess, is that I need to try other methods of soothing, and not always jump to nursing, i’m sure my nipples will thank me.

As for sleep, he isn’t sleeping through the night, and I don’t expect him to. I think mothers somtimes have too high of expectations for new borns. The past four nights he has been consistently up to nurse every hour and a half (although if you count from the start of a nursing session, to the start of the next, like some people do, then it’s more like every 2 to 2.25 hours). He is starting to have more of a pattern during the day, with a morningish “nap” and an afternoon “nap” although what times these occur are not consistent. Everything that i have read, says not to expect a baby under 4 weeks to have any sort of circadian rhthym, day and night are the same to them.

My recovery is going well. Two weeks ago I started taking short walks around the block, and this week was up to walking almost a mile. I have walked with Anderson in a moby wrap, an Ergo carrier, and his stroller. I am not quite confident or comfortable with the carriers yet, I feel like I either tie the moby too tight, or too lose, and with the Ergo I feel like his little face is smooshed into my chest. But, with both of these, and the stroller, he easily falls asleep as soon as I get him in the carrier and comfortable. I also have a sling, but it’s too small. I am sending it back this week, for a larger size. I’m looking forward to the new size arriving, so I can wear Anderson when we are out and about. Putting him in the sling is so much easier than the moby or the Ergo, at this point.  Ok, I got side tracked from my recovery….I don’t have daily pain any more at this point, and haven’t since week 1. I do have some pain when I sleep on my side for too long, or lift something too heavy. I’m trying not to get too anxious to get back into an exercise routine, so I can feel a little bit better about my body.

I have lost, with out trying, 30 pounds of the 42ish that I gained. I figure that 30 was the baby and fluids etc, from pregnancy, and the remaining 12ish are what I gained from not eating as strictly during pregnancy as I did, pre-pregnancy. Of course, like all moms, even though I have lost lots of weight, things are shaped differently, and my prepregnancy clothes, even my “fat’ clothes don’t fit yet. All in good time.

So, life with baby is good. His sweet little face makes every sleepless hour, and stretch mark worth it.